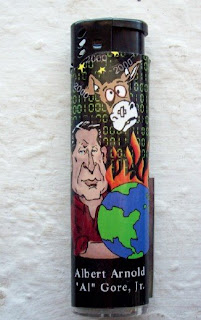 One of my favorite people, Al Gore, his fight to save the plant has been a lone one for so long. Again the pull-out has Quotes from him and the back has the same donkey thing as the "Bill Clinton Lighter". The pull-out thing works good, goes in and out without a problem. I doubt the outer sticker would stay on very long if it was used normally or got wet. I am cerious about what the lighter looks like underneath the sticker.

There are some Republican ones that I plan on getting, I think they have a Regan and Bush Sr. $4.99 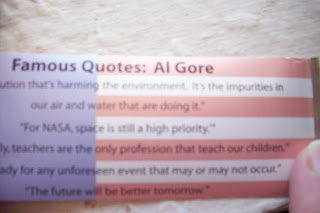 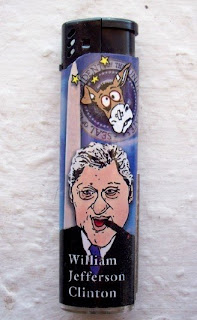 Since I have a lot of pictures on here and plan to post more, I decided to try out PhotoBucket as a picture host. does anyone have any complaints about them?
Posted by Niki No comments:

I got a good laugh the other day about this lighter. If you look back in the posts here you will find an article about "banning novelty lighters" and the picture for the article has a bunch of lighters on a table. what made me laugh is the one up front is this lighter (not this exact lighter, but the same mold).
The eyes flash when you lite it!